Can You Hit A Reverse Forehand?

Can You Hit A Reverse Forehand?

You are seeing it more and more. It’s popping up everywhere. The men’s game, the women’s game, I think John McEnroe is even hitting it. All kidding aside, the reverse forehand is a staple in the Modern Game and if you can’t hit it, you may be left behind. 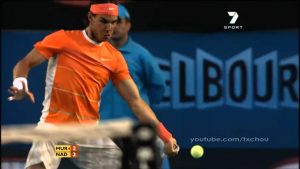 Why is the reverse forehand hit more and more?
It’s simple. It allows a player to hold the ball longer, buying them more time. Steffi Graf, winner of 22 grand slams and 107 singles titles, was one of the first women to utilize the shot. She was often criticized for not having a traditional contact point and unorthodox follow through. What people didn’t understand was she bought herself more time, allowing her to keep herself in points and stay aggressive with her racquet head speed.
How are players able to generate so much topspin with this shot?
Due to the contact point moving slightly back and the shear vertical approach up the backside of the ball, excessive topspin is imparted on the ball. With this extra topspin, the ball clears the net with more height increasing your margin of error. The spin will also bring the ball back into the court preventing it from sailing long. Rafael Nadal uses the reverse forehand better than anyone. He combines spin and power into his forehand. When you can do this, you generate a “heavy ball.”
Why do players follow through over the same shoulder on the reverse forehand?
The follow through over the same shoulder occurs because of the low to high approach to the ball and modified contact point. Because of the increased speed put on shots, players are using this technique more and more to counter attack their opponent’s penetrating shots. In the 53 Drills for Better Tennis DVD, I go over this shot “Paint the Fence Drill.” I believe with increased speed and power of the game, you will see players utilize the reverse forehand even more.
John Frausto2020-04-14T17:56:19-04:00Articles|

FREE COURSE!
One Hand Backhand
Improve Your Topspin And Slice Backhand. Launching July 2020, Fill Out The Form Below To Register Now!